Seen this picture on Pinterest? It's a good one. :)

I like to deviate from most recipes, but the core of it is the same. In this recipe they call for making your own pizza dough. There are many ways of going about this.

1. Go to a bakery, a pizzaria, or a place that makes pizza ie: grocery store, most often than not if you ask they'll sell you some for cheap.
2.  Buy frozen bread dough, it's basically the same.
3. Buy a pre made pizza shell.
4. Use something else, such as a french loaf or simple piece of bread.
5. Do it yourself.

I went with option 4. I was not in the mood for making food, the baby was kicking my butt so hard all I wanted to do was lay down and hoped the pain he was giving me would lessen. So I took the simple way out and picked up a loaf of garlic bread. 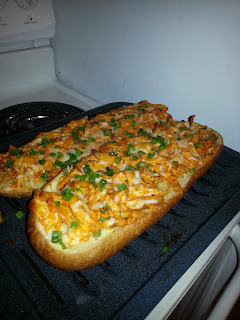 Following the rest of the instructions on the preparation it was quite easy, and I must say it turned out rather well. I had pre cooked chicken waiting for this dish and decided to make extra chicken so it's one less thing for me to prep for tonight's meal. Tossed in some shredded cheese, with a small portion to sprinkle on top, Frank's Hot Sauce, some green onions with some reserved for topping. Tossed it in the oven until warmed through and cheese was melted. Took it out topped with the fresh green onion. I was debating on putting cilantro on top, I love cilantro, and come to think of it a splash of lime would have made it even better.

Served as is, with a dollop of sour cream was an awesome meal. Very easy and quick. My husband hates left overs and insisted he take what was left to work with him for lunch, which in my books is a win.

This is something I would recommend and make again, cut into small serving portions and one could easily serve this at a party.
Posted by Renee at 09:52 No comments:

My first official post for Pinterest Chef. Here's a link to my Food Board. I plan on sharing recipes of my own and ones from Pinterest here as well as what's going on in my life, though it will always have something to do with cooking. I will post recipes that I've tried and will give my input on taste and if I'd make it again.

I'll start off I'll list the things I did NOT enjoy and won't be making again.

What was good: The concept behind this was very simple and straight forward. The end result was supposed to be pictured above.
What was bad: They did not turn out to be gummy, or solid. Instead it was a gooey mess. They didn't taste very good. I had even left them in the oven longer than the intended time in hopes it would tighten the fruit up. Once I found it wasn't going to have that firmness I had let them sit out for a time, let them cool completely, still they were mushy and not appealing.

I had this on my food board and ended up deleting it because it wasn't good and didn't turn out. 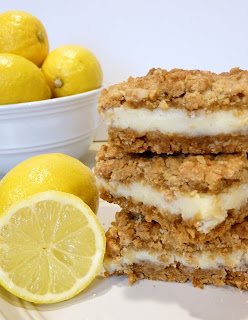 What was good: Just six ingredients to make something that looks so good? Sign me up.
What was bad: It was overly sweet. Like, "Oh my god it's not a salt lick, it's a sugar lick." but with a funky aftertaste. On top of that the oatmeal cookie portion was like a rock, almost impossible to eat. I wouldn't use the oatmeal stuff again.

Verdict: If you love sweet stuff mixed with lemons but with a funky aftertaste... this is your treat.

Again I had this on my food board and I deleted it once I tried it. What was good: Very simple. Very easy to prepare. Toss it altogether in a pan and let it go in the oven. Flavor was awesome, limitless possibilities to this. It could even doubled and tripled for larger parties. Add some shredded cheese, cilantro, guacamole, fresh tomatoes, and some warm tortillas and you're golden.
What was bad: I honestly can't think of anything bad to say about this dish.

Verdict: Ah-maz-ing! I will totally use this recipe again.
Posted by Renee at 17:20 No comments:

Renee
Hello, my name is Renee. I'm happily married and have a baby that's due in July. I have become addicted to Pinterest, especially the cooking and drink portion. I thought it would be nice to have a blog out there that tests these recipes that are posted, see what works and what doesn't.